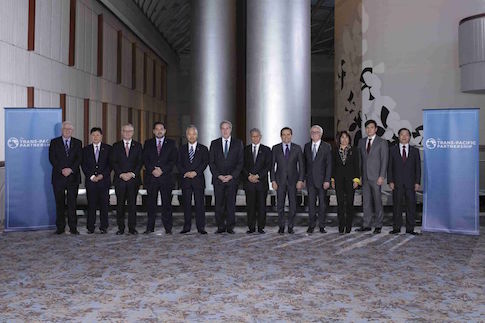 The Trans-Pacific Partnership (TPP), a trade agreement among 12 nations including Australia, Brunei, Canada, Chile, Japan, Malaysia, Mexico, New Zealand, Peru, Singapore, the United States and Vietnam was concluded by the TPP trade ministers on October 5, 2015..     The contents of the agreement had been kept secret throughout the years of negotiations, but its full text was finally made available by the U.S. Trade Representative’s office this past November 5th , and it can be accessed on the USTR’s site.

The TPP agreement contains individual sections for each country  in Chapter 2, general rules of origin in Chapter 3, and specific rules of origin for textiles and apparel in chapter 4.   All in all the TPP text includes 30 Chapters, 4 Annexes and over 2,000 pages.

TPP must now go through a series of political hurdles in the United States including approval from the Senate and the House of Representatives before it can be signed into law by the President.    Other participant countries will require a similar type of political process until the agreement is ratified and finally implemented by every member.  TPP would become the world’s largest free trade agreement and it would affect approximately 40% of the global  economy.

If you have any questions about TPP or free trade agreements please free to contact me by email or phone at 305-883-2811.

Any cookies that may not be particularly necessary for the website to function and is used specifically to collect user personal data via analytics, ads, other embedded contents are termed as non-necessary cookies. It is mandatory to procure user consent prior to running these cookies on your website.